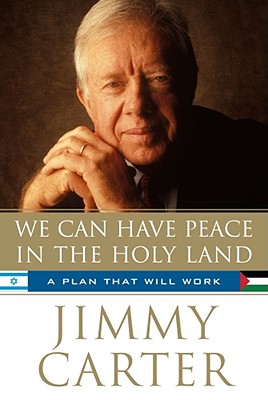 In this urgent, balanced, and passionate book, Nobel Peace Laureate and former President Jimmy Carter argues that the present moment is a unique time for achieving peace in the Middle East -- and he offers a bold and comprehensive plan to do just that.

President Carter has been a student of the biblical Holy Land all his life. For the last three decades, as president of the United States and as founder of The Carter Center, he has studied the complex and interrelated issues of the region's conflicts and has been actively involved in reconciling them. He knows the leaders of all factions in the region who will need to play key roles, and he sees encouraging signs among them.

Carter describes the history of previous peace efforts and why they fell short. He argues persuasively that the road to a peace agreement is now open and that it has broad international and regional support. Most of all, since there will be no progress without courageous and sustained U.S. leadership, he says the time for progress is now. President Barack Obama is committed to a personal effort to exert that leadership, starting early in his administration.

This is President Carter's call for action, and he lays out a practical and doable path to peace.

Title: We Can Have Peace in the Holy Land: A Plan That Will Work