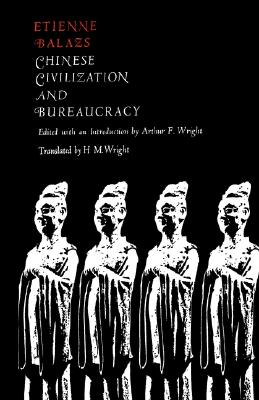 Born in Hungary, trained in Chinese studies in Germany, Etienne Balazs was, until his sudden and premature death in 1963, a professor at the Sorbonne and an intellectual leader among European specialists on China. In this book, a selection of Dr. Balazs' essays are presented for the first time in English. Arthur F. Wright, professor of history at Yale, and John K. Fairbank, professor of history at Harvard, have written a joint Preface and Mr. Wright has written an Introduction. Scholars and interested laymen will find a rich feast here in essays ranging over two thousand years of China's social, economic, political, and intellectual history. A wealth of data supports the various theories Dr. Balazs develops, in a graceful translation by Hope N. Wright.
Because Etienne Balazs regarded the Chinese past not as a curiosity but as a repository of relevant human experience, his essays are significant for anyone interested in the past and future of civilization. "If a reader should disagree with some of the brilliant points, he would still find them challenging and refreshing."--Journal of Asian Studies.

Title: Chinese Civilization and Bureaucracy: Variations on a Theme