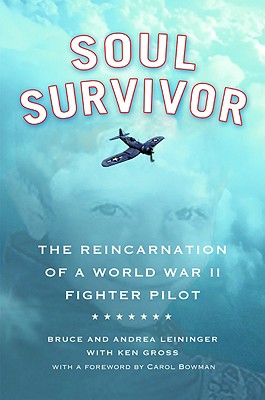 This is the story of James Leininger, who-- a little more than two weeks after his second birthday-- began having blood-curdling nightmares that just would not stop. When James began screaming out recurring phrases like, Plane on fire Little man can't get out the Leiningers finally admitted that they truly had to take notice.
When details of planes and war tragedies no two-year-old boy could know continued-- even in stark daylight-- Bruce and Andrea Leininger began to realize that this was an incredible situation. SOUL SURVIVOR is the story of how the Leiningers pieced together what their son was communicating and eventually discovered that he was reliving the past life of World War II fighter pilot James Huston. As Bruce Leininger struggled to understand what was happening to his son, he also uncovered details of James Huston's life-- and death-- as a pilot that will fascinate military buffs everywhere.
In SOUL SURVIVOR, we are taken for a gripping ride as the Leiningers' belief system is shaken to the core, and both of these families come to know a little boy who, against all odds and even in the face of true skeptics, harbors the soul of this man who died long ago.