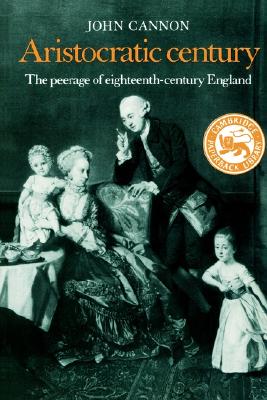 Since the work of Butterfield and Namier in the 1930s, it has commonly been said that eighteenth-century England appears atomised, left with no overall interpretation. Subsequent work on religious differences and on party strife served to reinforce the image of a divided society, and in the last ten years historians of the poor and unprivileged have suggested that beneath the surface lurked substantial popular discontent. Professor Cannon uses his 1982 Wiles Lecture to offer a different interpretation - that the widespread acceptance of aristocratic values and aristocratic leadership gave a remarkable intellectual, political and social coherence to the century. He traces the recovery made by the aristocracy from its decade in 1649 when the House of Lords was abolished as useless and dangerous. After the Glorious Revolution of 1688, the peerage re-established its hold on government and society. Professor Cannon is forced to challenge some of the most cherished beliefs of English historiography - that Hanoverian society, at its top level, was an open elite, continually replenished by vigorous recruits from other groups and classes. He suggests that, on the contrary, in some respects the English peerage was more exclusive than many of its continental counterparts and that the openness was a myth which itself served a potent political purpose. Of the prospering burgeoisie, he argues that the remarkable thing was not their assertiveness but their long acquiescence in patrician rule, and he poses the paradox of a country increasingly dominated by a landed aristocracy giving birth to the first industrial revolution. His final chapter discusses the ideological under-pinning which made aristocratic supremacy acceptable for so long, and the emergence of those forces and ideals which were ultimately to replace it.