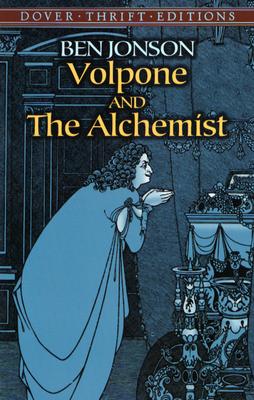 Much-studied and frequently performed, these comedies by the great Elizabethan playwright Ben Jonson satirize the greed, mendacity, gullibility, and pretension of seventeenth-century London society. Both plays abound in colorful characters, ingenious plotting, biting wit, and sharp insight into human nature.
In Volpone (1605), a crafty rich man attempts to augment his wealth by feigning a mortal illness. His wealthy neighbors, spying the opportunity for an inheritance, vie with each other in courting the "dying" man's favor. The Alchemist (1610) comprises a likewise avaricious cast, headed by a butler and prostitute who join forces with a swindler claiming to possess the philosopher's stone. The trio hosts a parade of eager victims whose hypocrisy and greed place them on a moral footing similar to that of the tricksters. Both plays offer sparkling examples of their author's novel approach to satire and his distinctive blend of savagery, humor, moralism, and a powerful sense of the absurd.