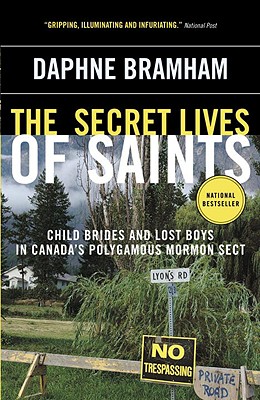 The Secret Lives of Saints paints a troubling portrait of an extreme religious sect. These zealous believers impose severe and often violent restrictions on women, deprive children of education and opt instead to school them in the tenets of their faith, defy the law and move freely and secretly over international borders. They punish dissent with violence and even death. No, this sect is not the Taliban, but North America's fundamentalist Mormons.

From its very beginning, the Mormon church, an offshoot of Christianity, found itself on the margins of both convention and the law. In addition to their unorthodox interpretation of the more mainstream Christian denominations, the Mormons embraced one tenet in particular that others found hard to accept: the idea that only by engaging in polygamous marriage could a man enter the highest realms of the kingdom of heaven. In 1890, under immense pressure from the federal government in the United States, the Mormons agreed to renounce polygamy in return for the right to the status of statehood in Utah, where they had settled. Since then, the Church of Jesus Christ of Latter-day Saints has officially taken the position that plural marriage is unlawful and is not to be pursued. However, colonies of renegade fundamentalist Mormons have continued to practise polygamy and thrive to this day in Canada and the United States, despite the fact that they are flouting the law. In the U.S., the "prophet" Warren Jeffs made headlines when, having been placed on the list of America's Most Wanted, he was apprehended in 2006 and was convicted as an accomplice to rape. While his acolytes and subjects lived in poverty, Jeffs was driving around in a luxury SUV when state troopers pulled him over. The story is much the same here in Canada, where the "bishop" of a fundamentalist sect in Bountiful, B.C., Winston Blackmore, heads up a multi-million dollar group of companies and flies on private jets while his supporters and employees live hard-scrabble lives and tithe their meager earnings to the church. Daphne Bramham explores the history and ideas of this surprisingly resilient and insular society, asking the questions that surround its continued existence and telling the stories of the men and women whose lives are so entwined with it -- both the leaders and the victims. How can it be that a group can live in open defiance of the law for over 100 years, when its leaders appear on the Phil Donohue Show and CNN and boast of their practices, which include marriage to girls well below the legal age of consent? How do their schools receive government funding when they teach racism and indoctrinate pupils into the belief that women are naturally subordinate to men? How do fundamentalist Mormon businesses escape prosecution for their regular violations of child labour laws? How does the sect manage to straddle the Canada--U.S. border so effortlessly, with American girls living as plural wives in Canada without actually immigrating and Canadian girls shipped off to the U.S. the same way? These are pointed questions, and a great deal depends on the answers. By delving into the life stories of the men and women who make up the ranks of the fundamentalist Mormons -- or "Saints" as they call themselves -- Bramham makes it clear that the arguments swirling around the legality of what goes on in Bountiful are anything but abstract. She tells the stories of young girls forced into "marriages" with men old enough to be their grandfathers and installed in households more like motels than homes, with each wife quartered separately and rigorously scheduled to have regular intercourse with her husband. She takes us into the life of a young girl forced into a "marriage" with such complex genealogical implications that she became her own step-grandmother. And it is not just the girls who suffer under the religious regime of the fundamentalist patriarchs. As Bramham shows, simple math is enough to tell you that boys must suffer as well. And they do. Because the Saints believe they are compelled to marry more than one wife, it is inevitable that while some men -- invariably the most powerful -- have more than one wife (or indeed dozens), others are doomed to have none. These young men work doggedly for the businesses run by their leaders, at a fraction of the wage they should be earning, in the hope of one day being rewarded with a bride and, therefore, a ticket to heaven. But there will never be enough girls, and so some of the boys -- those less compliant -- are cast off and become "Lost Boys," uneducated and unprepared for the outside world, but cut off all the same from the only community they have ever known. But for all the power wielded by the fundamentalist Mormon leaders, they are far from invincible. The Secret Lives of Saints also tells the stories of the men and women who have escaped the sect and challenged the Saints. Although, as Bramham argues forcefully, the government has often been asleep at the wheel when it comes to enforcing the law in the fundamentalist communes, the survivors and the fighters do have the law on their side and Bramham give a detailed and dramatic account of the prosecutors and police crusading to rein in the excesses of the Saints. Finally, Bramham makes it clear that questions of justice and freedom, of religious and cultural difference, don't only apply to marginal sects like the Saints, but to every group. Balancing what is good for the individual with what is good for the group, or weighing the entitlement of any group against the laws and priorities of the whole country, is not easy. Our constitution allows us to pursue faith as we choose, and that is not a right anyone would challenge lightly. And yet, as the fundamentalist Mormons show, this freedom can become a source of oppression. In the end The Secret Lives of Saints is about what is required for any tolerant society.