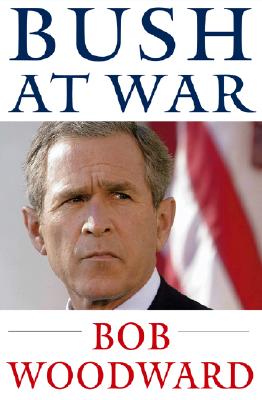 With his unmatched investigative skill, Bob Woodward tells the behind-the-scenes story of how President George W. Bush and his top national security advisers, after the initial shock of the September 11 attacks, led the nation to war.

Extensive quotations from the secret deliberations of the National Security Council -- and firsthand revelations of the private thoughts, concerns and fears of the president and his war cabinet -- make "Bush at War" an unprecedented chronicle of a modern presidency in time of grave crisis.

Woodward's virtual wiretap into the White House Situation Room reveals a stunning group portrait of an untested president and his advisers, three of whom might themselves have made it to the presidency.

Secretary of State Colin Powell, the cautious diplomat and loyal soldier, tasked with building an international coalition in an administration prone to unilateralism.

Defense Secretary Donald Rumsfeld, the brainy agitator and media star who led the military through Afghanistan and, he hopes, through Iraq.

"Bush at War" includes a vivid portrait of CIA director George Tenet, ready and eager for covert action against terroristsin Afghanistan and worldwide. It follows a CIA paramilitary team leader on a covert mission inside Afghanistan to pay off assets and buy friends with millions in U.S. currency carried in giant suitcases.