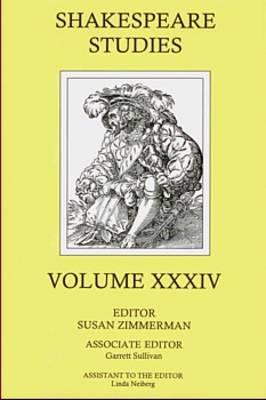 Shakespeare Studies is an international volume published every year in hard cover that contains essays and studies by critics and cultural historians from both hemispheres. Although the journal maintains a focus on the theatrical milieu of Shakespeare and his contemporaries, it is also concerned with Britain's intellectual and cultural connections to the continent, its sociopolitical history, and its place in the emerging globalism of the period. In addition to articles, the journal includes substantial reviews of significant publications dealing with these issues, as well as theoretical studies relevant to scholars of early modern culture. Volume XXXIV continues the journal's series of Forums, in which a group of scholars address an issue of importance to early modern studies. The Forum in this issue is entitled "Is There Character After Theory?" Organized and introduced by Raphael Falco, it features Tom Bishop, Dympna Callaghan, Jonathan Crewe, Christy Desmet, Elizabeth Fowler, and Alan Sinfield. Volume XXXIV also includes three essays: Roger Chartier on "Jack Cade, the Skin of a Dead Lamb, and the Hatred for Writing"; Julian Yates on "Stealing Shakespeare's Oranges"; and Anston Bosman on "'Best Play with Mardian': Eunuch and Blackamoor and Imperial Culturegram."