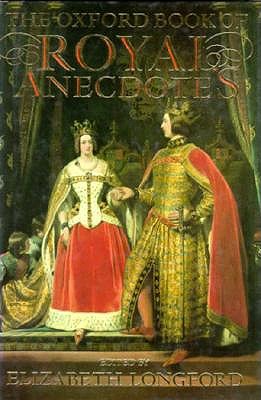 Here is a sparkling collection of Crown jewels--from amusing tales that humanize their subjects to dramatic stories of martyrdoms, palace intrigues, and bloody battles. Elizabeth Longford, intimate of the royal family and biographer of Victoria and Elizabeth II, has assembled the best anecdotes ever written and reported abut the kings and queens of England, across the full range of Britain's history from the first century A.D. to the present day.
Scholars and versifiers, lawgivers and saints crowd the pages alongside soldiers, scallywags, and imbeciles, and never have these distant figures been brought more vividly to life than in this splendid anthology. We read of Alfred's burnt cakes, Cnut and the wolves, Henry VIII and his six wives, George III resigning himself to American independence, Edward VII's gambling habits, and much more. There are samplings of royal wit (as when James I said of John Donne's poetry: Dr Donne's verses are like the peace of God; they pass all understanding."), of royal modesty (as in Elizabeth II's explanation of why she wore no crown at the musician Robert Mayer's 100th birthday party: "I thought it was Sir Robert's night, not mine."), and of royal certitude (as in Victoria's comment during a dark moment of the Boer War: "Please understand that there is no one depressed this house; we are not interested in the possibilities of defeat; they do not exist.")
The Countess of Longford's helpful commentary clarifies the complexities of royal genealogy and adds a sharp and often humorous perspective to bygone events. Her sources range from the earliest medieval chroniclers to biographers and historians of today, from dispassionate descriptions to intimate and revealing accounts from the letters and journals of the monarchs themselves. The result is truly a historical feast fit for a king.