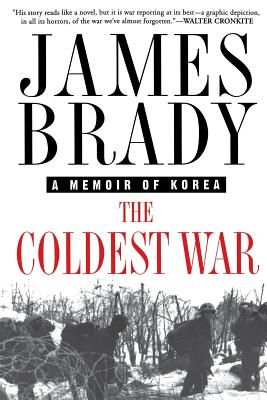 America's "forgotten war" lasted just thirty-seven months, yet 54,246 Americans died in that time -- nearly as many as died in ten years in Vietnam. On the fiftieth anniversary of this devastating conflict, James Brady tells the story of his life as a young marine lieutenant in Korea.

In 1947, seeking to avoid the draft, nineteen-year-old Jim Brady volunteered for a Marine Corps program that made him a lieutenant in the reserves on the day he graduated college. He didn't plan to find himself in command of a rifle platoon three years later facing a real enemy, but that is exactly what happened after the Chinese turned a so-called police action into a war.

The Coldest War vividly describes Brady's rapid education in the realities of war and the pressures of command. Opportunities for bold offensives sink in the miasma of trench warfare; death comes in fits and starts as too-accurate artillery on both sides seeks out men in their bunkers; constant alertness is crucial for survival, while brutal cold and a seductive silence conspire to lull soldiers into an often fatal stupor.

The Korean War affected the lives of all Americans, yet is little known beyond the antics of "M*A*S*H." Here is the inside story that deserves to be told, and James Brady is a powerful witness to a vital chapter of our history.