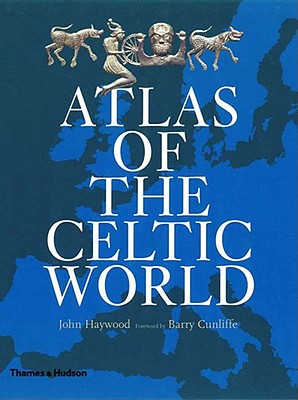 In fifty-four original full-color maps covering almost 3,000 years and spanning the whole of Europe, this first-ever atlas of the Celts graphically charts their dramatic history from Bronze Age origins to present-day diaspora. Taking into account the latest research and academic controversies over the historical identity of the Celts, the atlas examines the Continental Celts, the Atlantic Celts (Britain and Ireland), and the Celtic identity in the modern world.

The Continental Celts maps the Hallstatt and La Tene cultures in Central Europe, the migrations into Italy, Iberia, Greece, and Anatolia, the beginnings of state formation and urbanization, the Roman conquest, the fate of Celtic culture under Roman rule, and the foundation and fortunes of Brittany and the Bretons from the Dark Ages to their absorption by France.

Beginning with Iron Age Britain and Ireland, the Atlantic Celts covers the failure of the Romans to complete the conquest of the islands, the resurgence of Celtic civilization in the Dark Ages, King Arthur, the history of Gaelic Ireland from the conversion to Christianity to the Plantations, the Welsh princedoms to the English conquest, and the making of Scotland.

The Modern Celts examines the revival of Celtic identity, from the Celtomania of the eighteenth century through the growth of nationalism, language issues, the global diaspora, and the current state of Celtic culture.

Each map is accompanied by an authoritative text and supporting illustrations. Ranging over archaeology and military, cultural, literary, and political history, the Atlas of the Celtic World is a superb volume for home reference and an ideal introduction to one of Europe's most inventiveand influential people.

Title: Atlas of the Celtic World