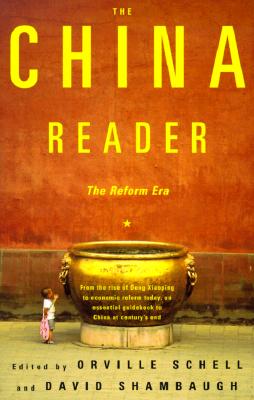 Perhaps no nation in recent history has undergone as total a transformation as China has in the past twenty-five years. For Chinese leaders, the death of Mao Zedong, the rise of Deng Xiaoping, and unprecedented economic growth have spawned new complexities. For the country's 1.3 billion citizens, changes have been equally dramatic, from skyrocketing sales in automobiles and satellite dishes to an explosion in violent crime and drug trafficking. The China Reader: The Reform Era is a fascinating compilation by two astute China watchers of the most important documents, articles, and statements on China from 1972 to the present. Here are the voices of the experts, from Chinese analyses of the fall of Soviet Communism to Western expos s of an ecological crisis that threatens global weather patterns into the next millennium. Here, too, are the artifacts of an era, from regulations to control Chinese cyberspace to a Party member's Orwellian justification of the military crackdown in Tiananmen Square. Authoritative and comprehensive, The China Reader is a timely guide to understanding a nation in the throes of change--a historic moment with profound implications for policy makers and markets from the Pacific Rim to Wall Street.