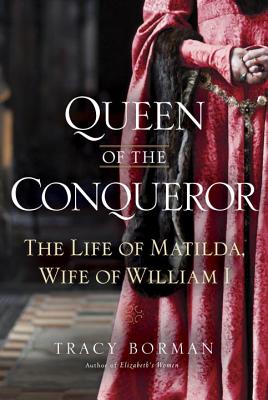 "NEW YORK TIMES "BESTSELLER
Around the year 1049, William, Duke of Normandy and future conqueror of England, raced to the palace of Baldwin V, Count of Flanders. The count's eldest daughter, Matilda, had refused William's offer of marriage and publicly denounced him as a bastard. Encountering the young woman, William furiously dragged her to the ground by her hair and beat her mercilessly. Matilda's outraged father immediately took up arms on his daughter's behalf. But just a few days later, Baldwin was aghast when Matilda, still recovering from the assault, announced that she would marry none but William, since "he must be a man of great courage and high daring" to have ventured to "come and beat me in my own father's palace."
Thus began the tempestuous marriage of Matilda of Flanders and William the Conqueror. While William's exploits and triumphs have been widely chronicled, his consort remains largely overlooked. Now, in her groundbreaking "Queen of the Conqueror, " acclaimed author and historian Tracy Borman weaves together a comprehensive and illuminating tapestry of this noble woman who stood only four-foot-two and whose role as the first crowned Queen of England had a large and lasting influence on the English monarchy.
From a wealth of historical artifacts and documents, Matilda emerges as passionate, steadfast, and wise, yet also utterly ruthless and tenacious in pursuit of her goals, and the only person capable of taming her formidable husband--who, unprecedented for the period, remained staunchly faithful to her. This mother of nine, including four sons who went on to inherit William's French and English dominions, confounded the traditional views of women in medieval society by seizing the reins of power whenever she had the chance, directing her husband's policy, and at times flagrantly disobeying his orders.
Tracy Borman lays out Matilda's remarkable story against one of the most fascinating and transformative periods in European history. Stirring, richly detailed, and wholly involving, "Queen of the Conqueror "reveals not just an extraordinary figure but an iconic woman who shaped generations, and an era that cast the essential framework for the world we know today.
Praise for "Queen of the Conqueror"
" "
" Tracy Borman] brings to life Queen Matilda's enormous accomplishments in consolidating early Norman rule. Alongside her warrior husband, William I, Matilda brought legitimacy, a deeper degree of education, diplomatic savvy and artistic and religious flowering to the shared Norman-English throne. Borman . . . the chief executive of Britain's Heritage Education Trust, fleshes out the personality of this fascinating woman, who set the steely precedent for subsequent English female sovereigns by displaying great longevity and stamina in a rough, paternalistic time. . . . A richly layered treatment of the stormy reign that yielded the incomparable Bayeux Tapestry and the Domesday Book."--"Kirkus Reviews"
"Tracy Borman tells this story with a steady eye and a steady hand, tracing what can be known of Matilda's part in the events that were to change the course of English history."--Helen Castor, "Literary Review"

Title: Queen of the Conqueror: The Life of Matilda, Wife of William I