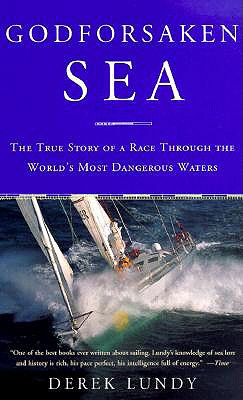 "The best book ever written about the terrifying business of single-handed sailing--.Lundy tells a harrowing tale, as tight and gripping as The Perfect Storm or Into Thin Air."--San Francisco Chronicle
A chilling account of the world's most dangerous sailing race, the Vendee Globe, Godforsaken Sea is at once a hair-raising adventure story, a graceful evocation of the sailing life, and a thoughtful meditation on danger and those who seek it.
This is the story of the 1996-1997 Vendee Globe, a solo sailing race that binds its competitors to just a few, cruelly simple rules: around the world from France by way of Antarctica, no help, no stopping, one boat, one sailor. The majority of the race takes place in the Southern Ocean, where icebergs and gale-force winds are a constant threat, and the waves build to almost unimaginable heights.As author Derek Lundy puts it: "try to visualize a never-ending series of five- or six-story buildings moving toward you at about forty miles an hour."
The experiences of the racers reveal the spirit of the men and women who push themselves to the limits of human endeavor--even if it means never returning home.You'll meet the gallant Brit who beats miles back through the worst seas to save a fellow racer, the sailing veteran who calmly smokes cigarette after cigarette as his boat capsizes, and the Canadian who, hours before he disappears forever, dispatches this message: "If you drag things out too long here, you're sure to come to grief."
Derek Lundy elevates the story of one race into an appreciation of those thrill-seekers who embody the most heroic and eccentric aspects of the human condition."

Title: Godforsaken Sea: The True Story of a Race Through the World's Most Dangerous Waters