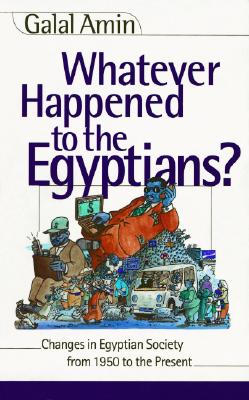 Based on both academic research and the author's own personal experiences and impressions, this delightful and informative book examines the underlying causes of some of the more disturbing social, political, economic, and cultural phenomena that characterize Egyptian society in the 1990s.

Egypt's crisis of culture and other woes are often attributed to the 'open door policy' (Infitah) initiated under President Sadat in the mid-1970s, and to the large-scale migration of Egyptian workers to the oil-rich states of the Gulf that began around the same time. Galal Amin contends, however, that these factors alone are insufficient to explain the fundamental changes in behavior and attitudes that characterize modern Egyptian life. The 'missing link, ' Amin argues, lies in the social mobility unleashed by the July Revolution of 1952, which was later accelerated by Infitah and workers' migration. The sudden upward mobility and attendant prestige, self-confidence, and purchasing power of a large segment of Egyptian society and the desire to display this new-found social position as conspicuously as possible have had an enormous effect on the attitudes and allegiances of these groups. Through a fascinating and often highly entertaining examination of issues ranging from the middle class, religious fanaticism, and attitudes to the West and Western culture, to the Egyptian institution of the summer holiday by the sea and the performing arts and entertainment, Amin posits that social mobility has changed the customs and habits, moral and material values, and patterns of consumption and investment of the aspiring classes, and has, furthermore, induced the Egyptian people to ignore national and ideological issues of grave importance.
This insightful book will prove a thought-provoking read for those concerned with emerging economies, international development, and privatization, and will intrigue anyone with an interest in the social history of Egypt.
The Arabic edition of this book was awarded the Cairo International Book Fair Prize for the best book in Social Studies in 1998. Comments on the Arabic edition:
'A rare example of combining social theory with concrete observation and intimate personal experience.... A very perceptive account of Egyptian social development with almost the impact of a dramatic creation." Abd al-Qader al-Qutt, al-Ahram, 2000.
"A very valuable and highly important contribution to social thought and to Egypt's social history.... A highly original and enjoyable book." Faruq Shusha, al-Ahram, 1999.

Title: Whatever Happened to the Egyptians? Changes in Egyptian Society from 1950 to the Present