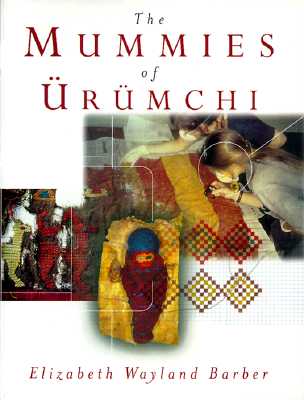 In the museums of Urumchi, the windswept regional capital of the Uyghur Autonomous Region in Western China -- what we know as Chinese Turkestan -- a collection of ancient mummies lay at the center of an enormous mystery. Some of Urumchi's mummies date back as far as 2,000 years -- contemporary to the famous Egyptian mummies, but even more beautifully preserved, especially their clothing. Surprisingly, these prehistoric people are not Oriental but Caucasian -- tall and large-nosed and blond with round eyes (probably blue). Where did they come from? What were these blonds doing in the foothills of the Himalayas? Few gifts are put into the graves of the dead, making it difficult for archaeologists to pinpoint any cultural connections, from clues offered by their pottery and tools. But their clothing -- woolens that rarely survive more than a fear centuries -- has been preserved as brightly hued as the day each was made.

Elizabeth Wayland Barber describes these remarkable mummies, their clothing, and the world to which they so mysteriously belonged, piecing together their history and peculiar Western connections both from what she saw in Urumchi and from the testimony of those who explored along the Silk Road centuries earlier. The result is an entertaining and informative unveiling of an ancient and exotic world.

Title: The Mummies of Urumchi