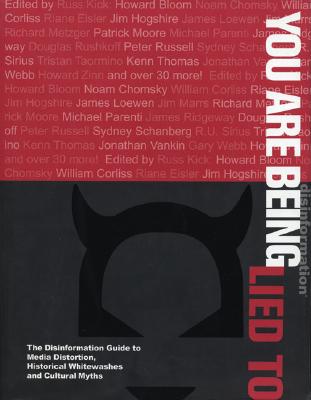 "You Are Being Lied To" is a massive collection of articles that ruthlessly destroy the distortions, myths, and outright lies that are fed to us by the government, the media, corporations, history books, organized religion, science and medicine, and society in general. No one is spared, and all sacred cows are candidates for the grinder.

Do you believe any of the following?
Alcoholics Anonymous is effective.Hackers pose a grave threat to the nation.There's a hidden code in the Bible.The Big Bang is an airtight fact.Thousands of species have gone extinct because of deforestation. Licking certain toads will get you high.Most terrorists are Middle Eastern.

Wake up You're being lied to.

This book acts as a battering ram against the distortions, myths, and outright lies that have been shoved down our throats by the government, the media, corporations, organized religion, the scientific establishment, and others who want to keep the truth from us. An unprecedented group of researchers--investigative reporters, political dissidents, academics, media watchdogs, scientist-philosophers, social critics, and rogue scholars--paints a picture of a world where crucial stories are ignored or actively suppressed and the official version of events has more holes in it than Swiss cheese. A world where real dangers are downplayed and nonexistent dangers are trumpeted. In short, a world where you are being lied to.

Among the revelations inside:
Pulitzer Prize-winning reporter Sydney Schanberg on John McCain's efforts to conceal information on POW/MIAsHoward Bloom on liars in the mediaRiane Eisler on the realities of human natureJames Ridgeway on tainted blood and moreJim Marrs on missing evidence in important casesGreenpeace cofounder Peter Moore on environmental mythsMichael Parenti on atrocities in KosovoDouglas Rushkoff on the information arms raceGary Webb on the gutless corporate mediaHoward Zinn on Columbus

Title: You Are Being Lied To: The Disinformation Guide to Media Distortion, Historical Whitewashes and Cultural Myths