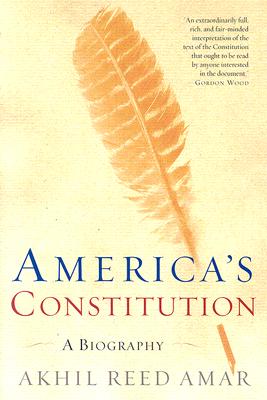 We all know this much: the Constitution is neither immutable nor perfect. Amar shows us how the story of this one relatively compact document reflects the story of America more generally. (For example, much of the Constitution, including the glorious-sounding "We the People," was lifted from existing American legal texts, including early state constitutions.) In short, the Constitution was as much a product of its environment as it was a product of its individual creators' inspired genius. Despite the Constitution's flaws, its role in guiding our republic has been nothing short of amazing. Skillfully placing the document in the context of late-eighteenth-century American politics, America's Constitution explains, for instance, whether there is anything in the Constitution that is unamendable; the reason America adopted an electoral college; why a president must be at least thirty-five years old; and why-for now, at least-only those citizens who were born under the American flag can become president. From his unique perspective, Amar also gives us unconventional wisdom about the Constitution and its significance throughout the nation's history. For one thing, we see that the Constitution has been far more democratic than is conventionally understood. Even though the document was drafted by white landholders, a remarkably large number of citizens (by the standards of 1787) were allowed to vote up or down on it, and the document's later amendments eventually extended the vote to virtually all Americans. We also learn that the Founders' Constitution was far more slavocratic than many would acknowledge: the "three fifths" clause gave the South extra political clout for every slave it owned or acquired. As a result, slaveholding Virginians held the presidency all but four of the Republic's first thirty-six years, and proslavery forces eventually came to dominate much of the federal government prior to Lincoln's election. Ambitious, even-handed, eminently accessible, and often surprising, America's Constitution is an indispensable work, bound to become a standard reference for any student of history and all citizens of the United States. From the Hardcover edition.