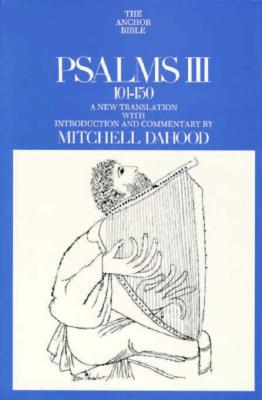 This is Volume 17A of The Anchor Bible, a new book-by-book translation of the Bible, each complete with an introduction and notes. "Psalms III (101-150)" is translated and edited by Mitchell Dahood, S.J., Professor of Ugaritic Language and Literature at The Pontifical Biblical Institute in Rome.
Having closely examined the original text, Father Dahood has attempted a unique translation which relies heavily on contemporary linguistic evidence. His work stresses the relation of the Psalms to the Ugaritic texts found at Ras-Shamra, and to other epigraphic discoveries along the Phoenician littoral.
This translation tries to capture as much as possible--within the limits of language and the scope of present scholarship--the poetic qualities of the original Hebrew. It attempts to render accurately not only the meaning of the Psalms but their poetic forms and rhythms as well. It is particularly responsive to the terse, three-beat metrical line predominant in Hebrew poetry, and it reproduces the parallelism so characteristic of biblical verse. In this process of probing the original, Father Dahood unearths some striking examples of passages previously mistranslated, and arrives at many provocative readings.
In addition to an introduction, text, and notes, this volume contains a comprehensive Grammar of the Psalter which makes use of much of Father Dahood's recent work with Ugaritic.