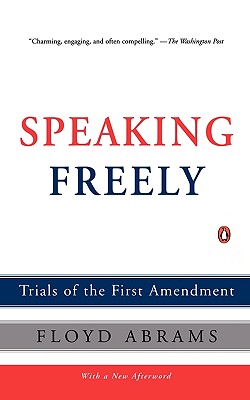 The rights guaranteed in the First Amendment--including freedom of expression--are among the fundamental touchstones of our democracy. In Speaking Freely, Floyd Abrams, who for over thirty years has been our most eloquent and respected advocate for uncensored expression, recounts some of the major cases of his remarkable career--landmark trials and Supreme Court arguments that have involved key First Amendment protections.With adversaries as diverse as Richard Nixon and Wayne Newton and allies as unlikely as Kenneth Starr, Abrams takes readers behind the scenes to explain his strategies, the ramifications of each decision, and its long-term significance, presenting a clear and compelling look at the law in action.