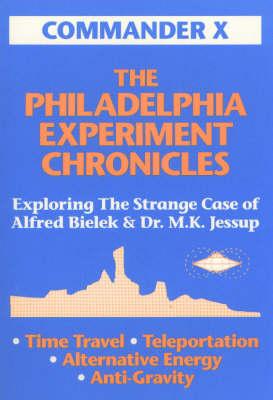 THE STORY OF A HIGHLY CLASSIFIED -- ABOVE TOP SECRET--PROJECT CONDUCTED BY THE U.S. NAVY IN 1942 CAN NOW BE TOLD The Philadelphia Experiment involved the teleportation of the U.S.S. Eldridge a mega-ton destroyer from its dry dock in the Philadelphia Naval Yard in Norfolk, Virginia -- a distance of around 400 miles. During at least part of the time, the Eldridge was "missing" from the City of Brotherly Love, the destroyer was said to have been transported into another dimension -- a sort of no man's land of darkness and silence from which few have been known to come back. Indeed, upon returning to this time and space, most of the vessel's crew -- all of whom had been left totally unprepared and unprotected by those scientists put in charge of the project -- either "caught on fire," got literally frozen into the hull of the ship, or went stark, raving mad. Much has been written on the subject, but this is the only account as told by a whistleblowing "insider." Retired intelligence operative Commander X reveals the story of one Alfred Bielek one of two known survivors, and the insanity he had to deal with because of this grand conspiracy that has been kept under wraps for decades.