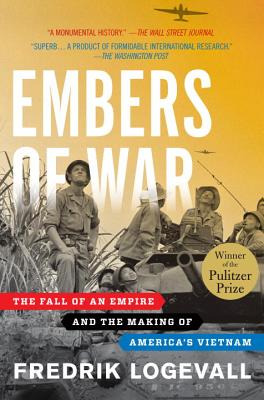 WINNER OF THE PULITZER PRIZE

Written with the style of a great novelist and the intrigue of a Cold War thriller, Embers of War is a landmark work that will forever change your understanding of how and why America went to war in Vietnam. Tapping newly accessible diplomatic archives in several nations, Fredrik Logevall traces the path that led two Western nations to tragically lose their way in the jungles of Southeast Asia. He brings to life the bloodiest battles of France's final years in Indochina--and shows how, from an early point, a succession of American leaders made disastrous policy choices that put America on its own collision course with history. An epic story of wasted opportunities and deadly miscalculations, Embers of War delves deep into the historical record to provide hard answers to the unanswered questions surrounding the demise of one Western power in Vietnam and the arrival of another. Eye-opening and compulsively readable, Embers of War is a gripping, heralded work that illuminates the hidden history of the French and American experiences in Vietnam. ONE OF THE MOST ACCLAIMED WORKS OF HISTORY IN RECENT YEARS
Winner of the Francis Parkman Prize from the Society of American Historians - Winner of the American Library in Paris Book Award - Winner of the Council on Foreign Relations Arthur Ross Book Award - Finalist for the Cundill Prize in Historical Literature

"A balanced, deeply researched history of how, as French colonial rule faltered, a succession of American leaders moved step by step down a road toward full-blown war."--Pulitzer Prize citation

"A monumental history . . . a widely researched and eloquently written account of how the U.S. came to be involved in Vietnam . . . certainly the most comprehensive review of this period to date."--The Wall Street Journal

"Lucid and vivid . . . a] definitive history."--San Francisco Chronicle "An essential work for those seeking to understand the worst foreign-policy adventure in American history . . . Even though readers know how the story ends--as with The Iliad--they will be as riveted by the tale as if they were hearing it for the first time."--The Christian Science Monitor

Title: Embers of War: The Fall of an Empire and the Making of America's Vietnam