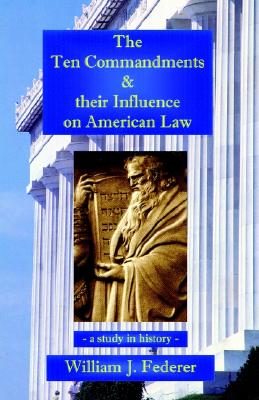 An in-depth study of how each of the Ten Commandments had a historical impact on the development of laws in America and affected the legal philosophy of our government framers. For example, the 4th Commandment-Keep Holy the Sabbath: PENNSYLVANIA FRAME OF GOVERNMENT, April 25, 1682, Article XXII: That as often as any day of the month...shall fall upon the first day of the week, commonly called the Lord's Day, the business appointed for that day shall be deferred till the next day, unless in the case of emergency. U.S. CONSTITUTION, 1787, Article I, Section 7, Paragraph 2 If any Bill shall not be returned by the President within ten days (Sundays excepted) after it shall have been presented to him, the Same shall be a Law Read how the Ten Commandments affected the views of America's leaders: The Ten Commandments and the Sermon on the Mount contain my religion - John Adams, Nov. 4, 1816, letter to Thomas Jefferson. The fundamental basis of this nation's laws was given to Moses on the Mount. The fundamental basis of our Bill of Rights comes from the teachings we get from Exodus and St. Matthew, from Isaiah and St. Paul. I don't think we emphasize that enough these days. - Harry S Truman, Feb. 15, 1950, Attorney General's Conference. See references to the Ten Commandments in court cases: The Ten Commandments have had an immeasurable effect on Anglo-American legal development - U.S. District Court, Crockett v. Sorenson, W.D. Va. (1983) It is equally undeniable ...that the Ten Commandments have had a significant impact on the development of secular legal codes of the Western World. - U.S. Supreme Court, Stone v. Graham, (1980) (Rehnquist, J., dissenting) An ideal book forstudents, teachers, journalists, writers and those interested in researching the foundations of American law

Title: The Ten Commandments & their Influence on American Law - a study in history