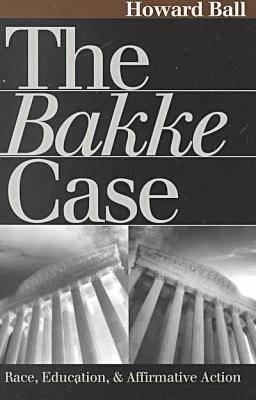 Twice denied admission to a California medical school despite better grades and test scores than successful minority applicants, Allan Bakke took his grievance to court and set off a major controversy over affirmative action. Bakke claimed that he was a victim of reverse discrimination, and his case has been considered by many as the most important civil rights decision since the end of segregation--and also one of the most difficult ever heard by the Supreme Court.

Howard Ball now reviews the many issues raised by this case that placed affirmative action on trial. He examines the law and politics surrounding Bakke in an even-handed manner, presenting both sides of the debate and discussing key arguments presented by pressure groups. He also offers a behind-the-scenes look at what transpired during the months between oral arguments before the Court and the justices' final decision, including secret conference sessions and judicial memos. While four justices confirmed that Bakke had been the victim of reverse discrimination, four others agreed that the school's affirmative action plan was a logical application of the 1964 Civil Rights Act. Justice Lewis Powell sided with both viewpoints, resulting in Bakke's admission to the school and the upholding of affirmative action. The Court's unusual split decision invalidated UC-Davis's quota program for minorities but also struck down a California court's ruling that race could not be used as a factor in considering applicants. In light of eroding public support for affirmative action today, Ball examines the impact of Bakke and its use as a precedent. He also reviews recent events such as California Proposition 209, Washington Initiative 200, the "One Florida Initiative" program, and the Supreme Court's refusal to overturn Texas v. Hopwood--a decision that forced the University of Texas to eliminate affirmative action in its law school. As affirmative action continues to divide judges, legislatures, and citizens, the fragile consensus forged by Justice Powell seems to be collapsing. This book offers essential background for anyone interested in the controversy, helping readers to better understand the dynamics of Supreme Court decision making in emotionally charged litigation and to arrive at a more informed opinion over this vexing issue.